When did it turn out that the story of the Nokia-boxes is not more than a legend? 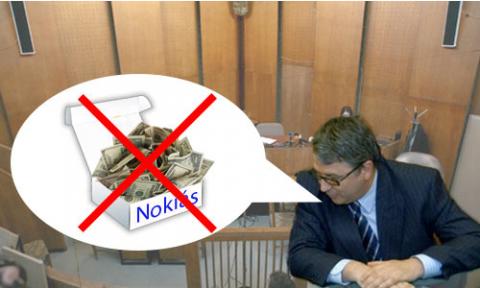 On October 9, 2012 the story took an unexpected turn: during his court hearing Zsolt Balogh unsaid his statements[1] on the Nokia-boxes. He was called by Judge Ibolya Hadnagy to declare if he keeps his investigatory testimony. Balogh said that he keeps the one given before the court. About his significantly different investigatory testimony read out by the judge he said he had stated incriminatory things in it in order to meet the needs expressed by the prosecution and avoid prison: “I am not a hero. I did not want anything else just to go home.” Later, in March 2015 he completely withdrew the story of the Nokia-box [2] and he apologized to Hagyó spending nine months in custody for his earlier false statements on him. Finally, the prosecution did drop the related investigation, admitting that the statements on the Nokia-box cannot be supported with evidence.

Why is it particularly significant that Balogh unsaid his testimony?

Because the whole Nokia-box scandal developed from his statements. Among others, this is how the story about the bribes delivered to Miklós Hagyó, former Deputy Lord Mayor, on several occasions by Balogh got around. The indictment[3]of the BKV-case also based on these statements just like the two counts against Hagyó.

Why did he withdraw his earlier statements?

Similarly to the ones involved he also reported that his investigatory testimony had been given under coercion. In my opinion, reading the related records it is evident that he said incriminatory things about others without questions and sense.

But what made him not to tell the truth to the investigators?

During the related interrogations he felt that the only chance to get home was to reveal the most illegal and criminal details on the running of BKV. The only thing he took into consideration was to avoid being arrested and getting into the situation of his colleagues. He admitted for the same reason he made his false statements to the press, among other on the Nokia-box.

What did Balogh say about the count related to the Nokia-box?

Only the “passive one” was charged in connection with the Nokia-boxes?

When did Balogh withdraw his story on the Nokia-boxes completely?

Five years have passed since Balogh first uttered the term “Nokia-box”, finally on March 12, 2015 he completely withdrew his story on the delivery of the corrupt money, and he apologized to Hagyó spending nine months in custody for his statements made earlier.

How did Hagyó react to Balogh’s act?

I would rather quote from the court transcript: “The presiding judge minutes that Miklós Hagyó, first accused is dropping tears.

What was the prosecution’s next step after the statements had been withdrawn?

First, they took no action, since until that point the existence of the Nokia box had been considered supported with one single testimony (since the testimony given under coercion and influenced according to their wishes it is obvious that they did not question what they practically dictate to Balogh.) The related investigation into bribery was initiated by the Prosecutor’s Office only after Balogh had unsaid his testimony. The investigation was finally dropped[5] on June 23, 2015, since based on the data obtained during the investigation the crime of bribery cannot be proved. (surprise, surprise)

When did the prosecution admit that the Nokia-box has never existed?

After the only incriminatory testimony has been unsaid before the court, the prosecution must have arrived at the conclusion that the main count against Miklós Hagyó, the acceptance of the corrupt money in the Nokia-box, could not be maintained. On June 30, 2015 at the trial of the BKV-lawsuit the prosecution admitted that the statements on the Nokia-box cannot be supported with any evidence.

[2] The nokia box story is over – Hagyó Files