Why is the Nokia-box still talked about? 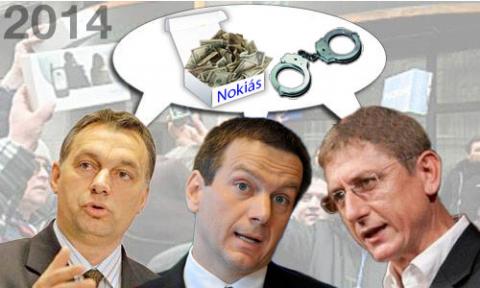 It seems to be that a part of the leading politicians ignore the fact that Balogh unsaid his testimony. The parties are still referring to the Nokia-box in front of the public. They must have some interest in doing so, since they are continuously trying to put either each other or the MSZP in an awkward position with it.

Did they attempt to raise the issue again closer to the campaign period?

As they did it before in 2010 during the parliamentary elections period and later the municipal elections period they raised the issue of the nokia box during the campaign period of the elections in 2014. The timing was planned well in advance: at the beginning of 2012 at the press conference following the reassignment of the suit to Kecskemét it was announced that the firs-instance verdict will be delivered in the peak of the campaign period, 2014.

Who was the one referring again to the Nokia-box firstly?

It was Benedek Jávor at the last destination of the campaign tour of Együtt-PM – he said there is a need for the change of the era in order to avoid the return of the “Nokia-box like periods”. However this statement was quite unsuccessful since it also indicated that in spite of his current alliance with former prime minister, Jávor would like to avoid the exact time when Bajnai was the prime minister since the assumed Nokia-box incidents took place during his governance. This is something they failed to remember unlike Tarlós.

Yes. Although “he does not prefer the term itself”, he did not miss to fight back to the Opposition with it at his press conference. He found it unscrupulous that a man comes to demonstrate who was a minister in the Gyurcsány-government, then became prime minister and allowed for the so called “Nokia-box” politics.

Did Gyurcsány react to these?

He did not leave it unanswered. A couple of days after Tarlós, in his speech held in front of Imre Nagy’s house he said that the left wing is defeatable because they have lost their belief and “You believed that you are “Nokia-box” people.

Did the Fidesz abuse Hagyó in their campaign?

Yes, they did. They planned the announcement of the firs-instance verdict by the end of the campaign period. In spite of the verdict delivered in favour of Hagyó, they were not disappointed at all, as Miklós Hagyó became the much-quoted example of corruption in the campaign, although he gave up politics four years ago. Besides the two formed prime minister and the prime ministerial candidate of the socialist party, he also appeared on the poster with the clown, being depicted as criminals. These posters appeared all around the country, furthermore the picture got to more than 4 million households in the form of prospectus. Of course, officially the action was carried out by CÖF – the non-governmental organization of the Fidesz.

Organizations responsible for the posters with the clown are in connection with the Fidesz?

Well, CÖF[1] – standing for Forum of Civil Alliance – should stand for the Fidesz Under Cover.[2] They consider themselves as independent of the political parties, however if we have a careful and critical look at the members and their activities we might gain some other impression: Zsolt Bayer, the founder of the CÖF is the former chief communications officer of the party, a closer friend of Orbán’s, the key figure of the Peace March. András Bencsik, a member of CÖF, is the founder of Hungarian Guards and one of the main organizers of the Peace March. Gábor Széles is not only an influential figure of CÖF, but also of the right wing related media market (Echo TV, Magyar Hírlap). László Csizmadia, founder and spokesman of the CÖF, is the president of the National Cooperation Fund responsible for the division of the 3-billion-public funds on a yearly basis. Well, hand in hand with the Fidesz this “politically independent” organization financed their campaign against stealing of public funds with public funds.

After this, the CÖF dares to make accusation of stealing public funds?

Exactly. Using of public funds the government not only withholds news and information, but also spreads their lies in the form of fliers and posters in the streets with the help of CÖF. They perfectly ignored the fact that the Nokia-box full of money never exists and in the former Deputy Lord Mayor’s case more and more times do the court decide in his favor, supporting his truth.

Did they get off Hagyó after the parliamentary elections in spring, 2014?

Unfortunately, they did not. During the campaign period[3] of the municipal elections Hagyó’s name appeared again. Surprisingly, again an opposition politician, József Tóbiás, the new president of MSZP, was aimed to be embarrassed.

But what kind of scandalous relationship is between Tóbiás and Hagyó?

Simply that the president of MSZP bought Hagyó’s apartment.

Besides this “apartment incident”, was the “criminal” Hagyó named again in the campaign?

Yes. Seemingly The Fidesz took all the chances to embarrass more and more opposition politicians abusing Hagyó’s name. What is more, they are talking about new Nokia-boxes.

Related to what the Fidesz suspect new nokia boxes?

When it was realised that the Együtt-PM cooperate with Zsolt Hajnal, whose company is involved in the Hagyó-case, the Fidesz found it unquestionable that the Együtt- PM attempt to give Hagyó’s business partners advantage over the municipalities of Budapest. Furthermore, they arrived at the obvious conclusion that Hagyó’s people support the campaign of the Együtt- PM because they see hope for new fruitful assignments and Nokia-boxes. This assumption is ridiculous just take into it consideration how the leader of the Együtt-PM views the “Nokia-box period”.

[3] How Did Hungary’s Election Become a Circus? – Hagyó Files