How did the money jump into the Magic box? 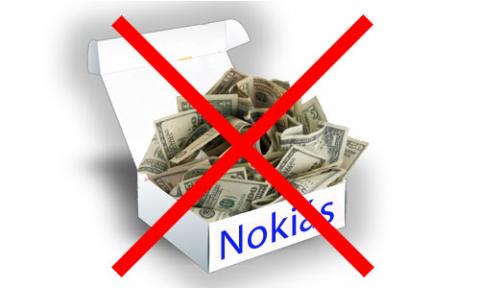 Nokia box is magical because every time the money jumped into it in different ways. Firstly Balogh accused Synergon that the company paid royalty to Hagyó and he gave over the half of the 30 Million HUF bribe – of course in a Nokia box. However he stated to the press that the money was put together by managers of different companies which were close to BKV. It was not just the source of the money but the circumstances were also magically different. He took over once in a garage, in a car in another time and once he saw the content of the Box or who knows.

Then from where did the money come due to Balogh?

One of the most magical characters of the Nokia box is that the money jumped into it every time in different ways. [1]  In his first interview to Magyar Nemzet daily on March 6, 2010 he said that BKV managers put together the money when they knew the time when Balogh delivers.[2] This contradicts to his first testimony on February 24, 2010 when he confessed that the 2*15 Million HUF came from Synergon since the company allegedly paid royalty to Hagyó in order to win the software license tender.

Did the prosecutor’s office perform investigation regarding the origin of the money?

They did not. Attorney General took over the investigation from the police because Hagyó could be accused with passive official corruption as he accepted money from Synergon (2*15 Million HUF). However they never asked Hagyó about the origin of the money. They even failed to interrogate anyone from Synergon during the two and a half years investigation. Neither Márk Lazarovics head of Synergon nor others were interrogated. Only Hagyó was accused. Therefore they did not accuse the one who gave over the money only the one who accepted it.[3]

It did not strike anyone?

Of course it did. When Hagyó noticed Balogh’s statement he asked the Tribunal if it had documents from the interrogation of Lazarovics. Since Ibolya Hadnagy judge also missed this document she sent a request to the Budapest Prosecutor’s Office whether they were carrying out an investigation in this case or who was interrogated.[4] Then it was clear that the prosecutor’s office did not perform an investigation against Synergon.

When, where and how did Balogh meet the head of Synergon?

We have different statements from Balogh in this story too. His first testimony does not contain anything about the location of the meeting but Balogh said that Lazarovics already offered the money to Balogh at that time. In his another testimony they met in a café during the early summer of 2008 where Balogh believed that Lazarovics planned to prepare a big IT contract. In this testimony there was not a single word about money. Later in another testimony you can read that they met in a BKV office not in a café. This time Lazarovics mentioned the money.

What Synergon contract is contained by the investigative minutes?

BKV concluded several contracts with Synergon, but the certain contracts remained hidden in the investigative documents. The first one – which was a governmental tender - was concluded on June 30, 2008. The subject was to deliver Microsoft products in 300 Million HUF amount. This contract was signed by Zsolt Balogh. The other one was an outsourcing agreement in an amount of 33 Billion HUF, signed already by István Kocsis on November 19, 2008. There is a third contract of 7 Billion HUF with Synergon concluded by BKK, under Tarlós’ administration on October 27, 2010. It is thought-provoking if Synergon had been corrupt then why would BKK have been in a contractual relationship with it?

Did Balogh conclude the software license contract with Synergon upon Hagyó’s order?

No, he did not, although he confessed during the interrogation that he concluded the Synergon contract upon Hagyó’ order. This contradicts with the fact that the Synergon tender was not prepared by BKV. It was a governmental tender so Synergon won the tender of the state and not of BKV. BKV only joined the contract. Just to make another contradiction Balogh confirmed the fact of the governmental tender in the same testimony. What we know is that Synergon contract was not chosen or preferred by Hagyó. BKV just improved the occasion and joined the governmental agreement.

Why did Balogh conclude the Synergon contract and paid bribe out of it if he had considered it as unethical?

Balogh concluded the Synergon contract since he allegedly paid the 2*15 Million HUF to Hagyó from this money during 2008 – 2009. He felt necessary to pay the bribe since Hagyó allegedly was threatening him to make him impossible because of the improperly signed certificate of completion of the public information system of Szentendre HÉV in 2007.

So did Balogh fear Hagyó?

This is not certain too. It contradicts to the evidences proving that Balogh signed the certificate of completion which was therefore a well-known fact. Secondly he made statements and interview in the media which’s coverage of reality is highly questionable and he has never confirmed them during the trial.[5]

If he had been scared so much he would have stood in front of the public hasn’t he?

He could have done it since he last met Hagyó in August, 2009. Hagyó resigned from the professional monitoring over BKV at this time and Balogh was fired this year too. Therefore he would have stood in front of the public in 2009 if he had wanted to. He had no reason to fear Hagyó at this time since none of them was working at BKV. However Balogh started to accuse Hagyó in the media only from March 6, 2010, half a year later.[6] If he had possessed evidences against Hagyó he could have turned to the police years before he turned to the media but he did so only five weeks before the elections.

How did Balogh remember the money transfer in 2008?

Balogh was indicating all the time differently the location and the date of certain actions thus he had previously confirmed two times that the meeting with Synergon leader took place in the garage of the Mayor’s Office, later in his confession of August 23, 2010 he stated that they met somewhere in a downtown café. Due to Balogh’s statement Hagyó confirmed the possession of this money during the St. Stephan’s Tour.

How does he remember to money transfer of 2009?

Due to Balogh’s statement he gave over the second half of the 30 Million HUF bribe to Hagyó in a Nokia box. He got the money from Synergon leader in a garage or in a car; the place was always different in his confessions. It is a question that why did Balogh receive the money from Lazarovics when he was already not the general manager of BKV. Passing the Box to Hagyó he sometimes checked its content sometimes he did not and sometimes Balogh saw the money sometimes he did not. Anyway, it is irrelevant since there was no money handover at all. This is proved by Balogh who withdrew his investigative confession and a police report confirms it too.

According to the police report of April 1, 2010 there were two bank transfers between Synergon and BKV from January 1, 2007 until February 1, 2010. The amounts tally to the ones stipulated in the contracts. The report not only contains the dates of the transfers but even refers to the further destiny of the money. So the total way of the money can be followed and you can find neither the 15 Million HUF nor Zsolt Balogh as beneficiary.

[4] The Official Acquittal: The Summary of the Legal Proceeding against Miklós Hagyó and Others in Relation to the Alleged Forgery of Private Documents – Hagyomiklos.com, http://hagyomiklos.com/en/content/official-acquittal-summary-legal-proce...