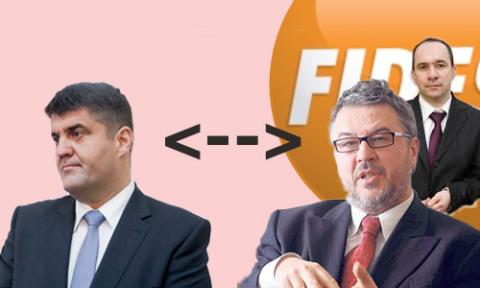 Yes, he was, but the accusation was unfounded and made long after Balogh’s testimony and Hagyó’s arrest. During his custody, he was not inquired about the nokia-boxes at all. Hagyó and Balogh were confronted on September 14, 2015. Hagyó stated that he has never received money from Balogh, however Balogh kept to his story and refused to answer to any questions. At that time, Balogh was already defended by István Szabó Dr., who was referred to as “the lawyer of the Fidesz” in the media.[1]

He was accused of the box only on August 30, 2010 although Balogh made his first statement about the boxes in March. A whole season passed. Moreover, Hagyó was not inquired in relation with the boxes during his custody.

When the confrontation took place?

Finally, on September 14, 2010 – although much earlier in May 2010 when the first defendants were interrogated, Hagyó’s lawyer requested for Hagyó’s confrontation with everybody who stated the opposite of what he did.[2]

During the confrontation did Balogh make statements different from his earlier ones about the nokia-boxes?

This time Balogh simply refused to answer any questions. Despite the fact that earlier he had a wide range of memories of the monies received by Hagyó and details of the deliveries, (as a refresher – in one of the versions Hagyó received 15 million from the chief executive officer for a given Synergonos contract which was signed undoubtedly according to the instructions of the former Deputy Mayor; the money was delivered in the Audi A8 of the CEO in the garage of the city hall. According to this version Hagyó received the money in a city hall room but he did not have a look into the box. In a the same case was reported to take place in a coffee shop in the city center, and Hagyó did have a look into the box, making sure that it is full of money.) Balogh refused to answer to any questions about the source of the money.[3]

Why he did not want to confirm the correct version of the story?

According to the official transcripts of the court hearings Balogh was advised not to answer to any related by the clerk delegated by Balogh’s lawyer, István Szabó, alias the “lawyer of the Fidesz”.

The “lawyer of the Fidesz”? What does it mean?

The main profile of his attorney office is the representation of the State and Local Governments as owners in the public service companies. As the representative of the Fidesz related Local Government in Pécs he played a role in taking the ownership of the Waterworks of Pécs, and also performing the company invasion actions of the Hungarian Development Bank. The deed of foundation of the Foundation for the Civil Hungary was notarized by him. Besides, he was involved in the management of the public procurements of the Development of Nation Infrasructure Ltd. –the procurements being worth more billion forints were won by the Közgép belonging to Lajos Simicska’s interest. Besides the state orders, István Szabó was rewarded with appointments and awards by the Orbán government. He became the president of the Supervisory Board of the Szerencsejáték Ltd., the delegate of KDNP (Christian Democrats People’s Party) the coalition partner of the Fidesz in the National Election Committee, member of the execution board of the Tettye Forrásház Ltd., co-president of the Ethical Committee of the Hungarian Water Utility Association (MaVíz), finally he was awarded with the Commander’s Cross of the Order of Merit of the Republic of Hungary by Orbán.

Since when the “lawyer of Fidesz” has been representing the “nokia” Balogh?

István Szabó also represented Zsolt Balogh already in the BKV-case. At the beginning Balogh was defended by the nation-wide known György Bárándy Dr., but soon he changed lawyer. In March 2010 he contacted István Szabó Dr., at the same time of his above mentioned appointments and delegation by KDNP. But there relationship was not limited to the nokia-box case. On November 18, 2011 Balogh became the general manager of the PK Busrent Ltd, a transport company in Pécs.[4] Most probably he was assigned to the position with István Szabó’s help. To sum it up since 2010 Balogh was defended by an attorney office which represented a Fidesz related local government, then in 2011he took a manager position at the weakened opponent of the local government in question – because here comes the twist: the local government is a co-owner in the PK Busrent Ltd. Pécs trustee.