How did the Nokia-box effect the parliamentary elections? 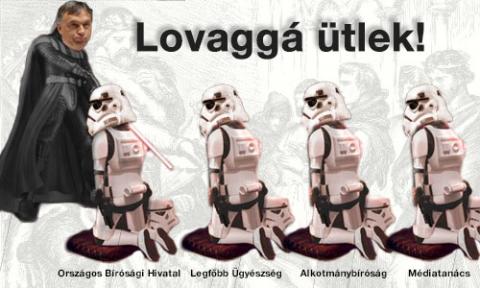 The smear campaign against Hagyó had significant role in the two-thirds victory. The new Fidesz-led government appointed Tünde Handó[1] as the president of the National Office for the Judiciary, Péter Polt as the Chief Prosecutor of Hungary, Mária Szívós as signatory judge, furthermore they established their authority over the media with the help of the media law.[2] As the Nokia-box had an influence on the election, the election also had an effect on the Nokia-box case, as the above mentioned appointees played a significant role in the progress of the BKV- and Hagyó-case.

Thanks to the Nokia-box legend has the left-party been associated with corruption?

Yes, it has. After Zsolt Balogh’s statement the whole nation was shocked. At the time of the 2010’s election the Nokia-box became the symbol of corruption in the public awareness. The idea of a corrupt, left-liberal and rotten government developed by the right-party related media seemed to be proved for people criticizing the Gyurcsány-government. As a result of the smear campaign the left-party not only lost the elections, but Fidesz was able to obtain the two-thirds majority.

What were the consequences of this two-thirds majority?

It meant that Fidesz could (can) amend the law according to their interest. Furthermore they could fill important and influential positions with their own confidants into.[3] This is how the National Office for the Judiciary lost its independence, the Prosecution Service of Hungary, the Constitutional Court and the media.

Did they appoint their old well-tried confidants?

Yes, they did. As an example, Péter Polt was also the Chief Prosecutor of Hungary during the first Fidesz-led government. In 2002 when the Fidesz was dismissed he prevented all the investigation which could reveal any crimes related to the Fidesz. In 2010 when the Fidesz was reelected the same position was ensured for Polt for the next nine years. During his career more and more statements were publicly made about cases when the defendants were put under pressure by Central Investigation Office of the Prosecution to make the desired testimonies. Another scandalous case related to Peter Polt was when the authority to reassign cases was going to be delegated to him in his Chief Prosecutor position to establish the conditions of the reassignment of the BKV-case to Kecskemét. Although it was prevented by the Constitutional Court, they found another way to further their interest. After amending the Fudamntal Law, the authority was delegated to the president of the National Office for the Judiciary.

How can it be known that the president of the NOJ is the confidant of the Fidesz?

Tünde Handó was heavily criticized for her appointment, as her husband, József Szájer is one of the key person in the reform of the public law pushed through by the Orbán-government. Despite this fact, or rather thanks to this fact, 13 December 2015 Handó was appointed to the president of the NOJ replacing the National Council of Justice with a two-thirds majority by the Fidesz-led Parliament’s secret ballot. With the position she gained the right to assign the court acting in any given case, furthermore she practices personally the right to promote, reassign, dismiss and control. After her appointment, Handó first measure was to reassign[4] the BKV-case to Kecskemét[5] without the possibility of legal remedy.

Was the Fidesz able to take control over the media as well?

They have been taking all the measures to do so. After their victory in 2010, the Fidesz immediately took the first measures to gain control over the media. They rewrote the media law. Under the new act they established a Media Council with full authority, members of which are not typical of advocating the idea of free and independent press. Monika Karas, the president of the council was appointed by the President, the members were elected by the “impartial”, Fidesz-dominated parliament with a two-thirds majority – for a 9-year-period. The Media Council controls the assignment of all the frequencies, the contents in the whole media, imposes fines and prescribes that the news media[6] can publish only the news gathered from the state-controlled MTI.[7]

Also in the Constitutional Court we can find judges who can be associated with Fidesz, right?

That is right. Let’s take Mária Szívós who served her appointment. In 2006 during the riots persons in pre-trial detention were released by the council led by Szívós. She was also the one who ordered the pre-trial detentions related to the BKV-case and prolong them without criticism. After, in June 2011 by the two-thirds Fidesz parliament she was appointed as the member of the Constitutional Court despite the “professional mistakes” pointed out by Strasbourg. Since then from Investigatory Judge being promoted to Constitutional Judge, Mária Szívós comments on all the constitutional court decisions important from the perspective of democracy and the rule of law, expanding on the reasons of her disagreement. When the reassignment of the cases was stated to be the contrary to the Constitution by the court, she was the only one expressing her objection.