How did the press pick up the story of the „Nokia-box”? 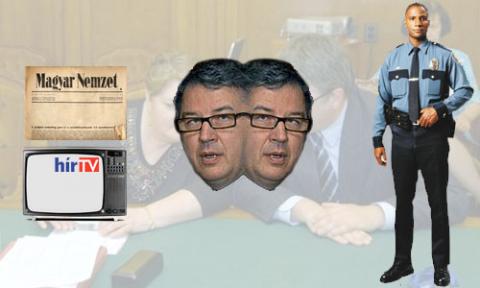 One month before the parliamentary elections Zsolt Balogh begun to give interviews about the Noki-box, but only to the right –party related media. First, in the Magyar Nemzet,[1] later on the Hír-TV[2] the smear campaign continued. The Nokia-box, however, became more and more magic, since the former Chief Executive Officer’s statements on the exact source of the money and the circumstances of the delivery itself were changing day by day. These contradictions were never spotted by the investigators, although they were the only one aware of all the versions of the same story. For the audience only the official statements were available. By this time Balogh’s incriminatory statements were considered to be facts.

When was the first time when Zsolt Balogh talked about the Nokia-box?

The first “out-coming” took place one month before the parliamentary elections. 6 March 2010 the full interview done by the righ-party media appeared in the Magyar Nemzet with the title “I handed over the money to Hagyó in a Nokia-box…”

What was this interview about?

Basically, Balogh talked in details about his roles had within BKV and about a death threat he had received, which makes him feel that the truth should be told.[3]

What was the truth according to Balogh?

In this first interview he stated, that in Gödöllő Hagyó told him to pay a so-called “yearly membership fee, 15 million forints, in cash before Christmas”.[4] According to Balogh’s report more than 70 million forints was collected by Hagyó through him. Since then he is aware of the fact that 15 million forints can be placed in a Nokia-box, as once the money was delivered to Hagyó in that – he stated. To the reporter’s question that the money was collected at the BKV by the leaders close to Hagyó. They had obtained the money from companies in closer cooperation with BKV.[5] To the question “where was the money delivered”, he said in “Lelovics Otto’s room”.

Where the interview-tour went on?

Also in the right-party media, one day later. This time Balogh gave his interview to the Hír-TV. 7 March 2010 in the interview he confirmed again that he sent money to Hagyó several times.[6]

But why should we think that this is not the exact truth?

Because in Kecskemét before the court he admitted that he had made his incriminatory statements about Hagyó with false content. By the way, the fact that he had lied could be proved much earlier.[7]

But what was Balogh’s reason for making contradictory statements?

I have no idea. Anyway, later – in 2014 during the trial he made an interesting statement on this: he pointed out that it was not his own idea to make statements with various contents to the right-party media. After, he refused to answer further question regarding this specific comment of his.

But how come that during the investigation nobody questioned Balogh’s contradictory statements?

It seems to be that the investigators do not read the press or watch TV. The problem is that only the BRFK had the opportunity to examine Balogh’s investigatory testimony more closely Only they had the chance to compare it to his earlier statements made in the media and realize that something is wrong. The testimony differs in material circumstances and facts from the statements had made to the media.

Because of the “Nokia-box” statements he was given the name “Balogh with the Nokia”?

Not because of that. The nickname “Nokia” was given to him earlier. [8]25 September 2009, half year before his first “Nokia-box” interview the magazine 168 óra mentioned him as “Balogh with the Nokia”. According to the related article Balogh was said to have a separate Nokia only for making calls with Hagyó. Supposedly Balogh came up with the idea to put the money in the “magic” Nokia-box finding inspiration from his nickname.